Blog > It’s time to change the debate about diversity

I recently read Matthew Syed’s book ‘Rebel Ideas’ – which I recommend to everyone.

The book argues that individual intelligence is always trumped by cognitive diversity and provides multiple compelling accounts of how organisations have floundered when they have failed to embrace diversity whilst others that have appreciated the power of diversity, have triumphed.

Perhaps the most chilling example was the CIA’s failure to avert 9/11.  The CIA’s predominately white Anglo-Saxon Protestant Americans failed to understand Bin Laden. They considered him to be primitive and no threat to the almighty USA. It’s almost certain that a person more familiar with Islam, would have identified the symbolism of his actions and realised the threat that he posed.

In fairness to the CIA, it’s understood that since 9/11 there has been a positive shift to developing a more diverse workforce.

There are many other studies in the book too from how Gucci achieved 136% growth whilst Prada declined 11.5% and how California’s Santa Clara Valley overtook Boston’s Route 128 to become the dominant American technology ecosystem.  Each study showing the difference that embracing diversity can make.

On reading this book it struck me that, ironically, the debate about diversity lacks diversity.

The circular debates seem to focus on whether it’s right to promote diversity over corporate success. Even the most passionate advocates of diversity seem to be locked into the idea that organisations should promote diversity because it’s the right thing to do rather than because of the windfall of prosperity that a diverse workforce will deliver.

As a business leader doing ‘the right thing’ on diversity (and everything else) is part of our DNA.  We continue to learn, and Matthew Syed’s book has also been useful for ideas to further exclude any unconscious bias.

We do not need to know that doing the right thing will bring financial success, but it is reassuring to know that the saying ‘we’ll reap what we sow’ holds true. 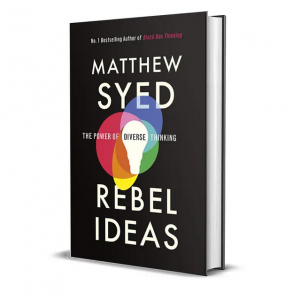 Stay up to date

Any cookies that may not be particularly necessary for the website to function and is used specifically to collect user personal data via analytics, ads, other embedded contents are termed as non-necessary cookies. It is mandatory to procure user consent prior to running these cookies on your website.